We have a winner! Congratulations to Miggie Pickton for this brilliant photo of a Pom scaling the Spire of Dublin. Having scaled the Spire of Dublin #EprintsPoms is pommed out. pic.twitter.com/4EgbPvOdg2 — Miggie Pickton (@NECTARQueenBee) June 15, 2016 Just for a little bit of fun this year we are going to have the EPrints Pom Challenge! Come chat to us at OR2016 and pick up a Pom! Tweet* us a photo of him somewhere interesting or fun, using the #EPrintsPoms hashtag. We will be awarding a prize for the best photo! *No harm should befall our little blue friends. END_OF_DOCUMENT_TOKEN_TO_BE_REPLACED

We are pleased to confirm that EPrints Services has been contracted by Jisc to provide technical support to the UK’s HEIs for the REF Compliance Checker plugin for EPrints until mid-July 2016. If you are unfamiliar with the plugin further information, including a screencast, may be accessed here. Should you require help to install the REF Compliance Checker plugin and you are currently an EPrints Services customer, please get in touch via your usual support routes. Other UK institutions needing technical support should contact info@services.eprints.org in the first instance. END_OF_DOCUMENT_TOKEN_TO_BE_REPLACED

As 2015 draws to a close, we at EPrints Services would like to wish all of our friends and customers a very Merry Christmas and a Happy New Year. We hope that 2015 has been a successful year for your EPrints repository, and we look forward to working with you in 2016. We’ve had another busy year at EPrints HQ, with activities focused on upgrading repositories, and transitioning to our new hosting platform. We have also been busy working on new Research Data and Open Education centric repositories, and aim to expand upon these further in the new year.   He’s making an EPrints, He’s searching it twice, Selecting END_OF_DOCUMENT_TOKEN_TO_BE_REPLACED

Adam’s OR2015 OR2015 was great.  I think I enjoyed myself more than I have at any other Open Repositories.  I was involved in a number of things that kept me really busy throughout the conference: Developer Track The conference committee had decided that a full developers track would replace the Developer Challenge of previous years, with paper presentation sessions in the main conference.  The amazing and well-organised Claire Knowles co-chaired the track with me, and we sent out our call with an emphasis on practical demonstrations and informal presentations. We filled two sessions with submissions, and we enjoyed a broad set of technology and process demonstrations.  Hardy Pottinger gets END_OF_DOCUMENT_TOKEN_TO_BE_REPLACED

Following a period of internal testing we are pleased to make the first stable EPrints 3.3 release available for download at http://files.eprints.org/691/. If you just want to test out the new version you can access our demonstration repository at http://demoprints.eprints.org/ (account creation requires email address verification). EPrints 3.3 represents 18 months of effort since the release of 3.2. Version 3.2 brought with it new features that were aimed at making EPrints more flexible and giving more control to repository administrators. 3.3 is a natural progression of this effort that enables a new, completely flexible, data model managed through configuration files. This sets the foundation for using EPrints END_OF_DOCUMENT_TOKEN_TO_BE_REPLACED

When: 7/8th December 2010Where: University of SouthamptonCost: Free (You pay accommodation) Registration has opened for the EPrints Bazaar event in Southampton which will provide the first chance for people to get hands on with the new EPrints App Store (The EPrints Bazaar), the future of extension development for EPrints. The event will provide hands on access to the Bazaar, demonstrate the features and allow discussion on features which would be nice to have in the first release next year. By allowing people to develop their first Bazaar Application for EPrints we focus this event on developers around the repository community who wish to get their END_OF_DOCUMENT_TOKEN_TO_BE_REPLACED 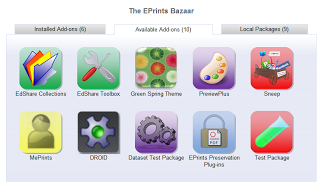 by Steve Hitchcock “lovely, very very very nice, wow! fantastic:) impressive Woah! Really easy! working!” A summary of some of the reaction to the first ever public appearance of the EPrints Bazaar at Repository Fringe 2010. A new app store, EPrints Bazaar, that enables users to install repository apps and plugins with a single click, made its debut to great acclaim at the latest Repository Fringe meeting in Edinburgh. The idea for EPrints Bazaar takes its lead from other widely successful platforms, particularly for mobile applications, making the apps, extensions and design themes simple to upload, install and use. The apps are designed for use END_OF_DOCUMENT_TOKEN_TO_BE_REPLACED

Do you have lots of content in a repository or content management system? Are you worried about long term storage and access to this content? Do you like wine? If the answer to the first two is yes then attend the Planets and EPrints digital preservation tutorial prior to iPres2010 in Vienna, Austria. If the answer to all three is yes then why aren’t you already registered! With both projects ending their current phase of investigation into digital preservation this tutorial offers the final and best opportunity in this phase to learn how the resulting products can help you. This is also the only digital END_OF_DOCUMENT_TOKEN_TO_BE_REPLACED

EPrints is at ECDL co-running a preservation workshop with the Planets project. We’ve covered a lot of the theory of preservation, and have also done some practical exercises showing the forthcoming EPrints 3.2 features that assist with the preservation agenda. Firstly we had them playing with the new storage layer. This enables repositories to control the locations in which files are stored. We covered how to set storage policies, report on how many files were in each supported storage area (local, cloud, etc), and copy items between locations. The second set of exercises covered preservation file format risk assessment. EPrints 3.2 can keep track of END_OF_DOCUMENT_TOKEN_TO_BE_REPLACED